Gutenberg vs Classic Editor for Creating Web Pages in WordPress

Over the last few years, WordPress – a platform on which over 60 million web pages have been created – has not undergone major changes until the appearance of the modern Gutenberg editor on which, by arranging the so-called blocks, users have more elegant solutions when creating web content.

One of the most popular platforms for creating websites, exactly two years ago, through version 5.0, introduced the so-called block or Gutenberg editor. It is named after Johannes Gutenberg, who invented the mobile-block printing system and started a world revolution in the field of printing more than 500 years ago.

This name was originally given to the project at the time when the editor was still in the development phase because the goal was to completely change the process of creating and editing WordPress posts and pages. As in the past, when the printing blocks were arranged in a printing tray, now the so-called blocks of content are sorted in the editor and, as such, published on web pages.

Also read:
– What You Need to Know About the Gutenberg WordPress Editor?
– Gutenix Subscription Review – WordPress Starter Themes For Elementor and Gutenberg

Gutenberg is an attempt by WordPress developers to keep up with the fast-growing DIY trend. In fact, it is a system for editing the desired content contained in blocks, which is so simple that anyone can build a beautiful website using the ‘drag & drop’ interface, making the process of creating web pages simpler and more interesting.

This is especially given that WordPress has established itself as a platform thanks to which even those who do not have technical skills can design a web page.

Table of Contents show
3 Main Reasons Why the Classic Editor Was Replaced by Gutenberg
Easy Creation of Complex Content
Editing via Blocks
Add Complex Attributes to Posts and Pages Without Plugins
Gutenberg’s Advantages Over the Classical Editor
Differences of Gutenberg in Relation to Page Builders
Appreciate Our Work:

3 Main Reasons Why the Classic Editor Was Replaced by Gutenberg

The main goal of Gutenberg’s development was to make the process of creating and editing content easier and more accessible to everyone. No previous programming knowledge is required to work with this editor. It also abolished the use of codes, which were previously needed in the classic editor. Now, all you have to do is add blocks of content to places that suit you.

In the drop-down menu, you can choose how the blocks will be arranged and what content they will have. The content type is divided into groups, so for example, in a text-related group, you have options such as titles, lists, tables, etc. In addition, blocks can contain pre-prepared forms that are most commonly used, so you can insert a block that will automatically contain combinations of images and text that you can easily edit, thus saving time.

As we have mentioned, Gutenberg has several different types of blocks. By combining them, you can create modern content within minutes. Images, audio, and video content are added directly to posts and pages, unlike a classic editor. If the content does not suit you, you can easily remove or modify it.

One very useful option is the possibility of using the so-called ‘reusable’ blocks, which means that when you put together one block that you know you will use multiple times on different pages, such as a featured product or a ‘call to action’ widget, you will translate such a block into ‘reusable’ and it will be available to you in the drop-down menu. Thus, it saves you from creating the same block multiple times. You can easily change the spacing and margins between blocks in the block options. Editing the entire page allows you to easily restrict its visibility or publish it on a specific date. Determining the category, attributes, header layout, and cover photo are also accessible with no problem.

Add Complex Attributes to Posts and Pages Without Plugins

Unlike its previous version, it no longer requires editing the HTML code to create pages with a custom layout, nor does it require a special page creation tool. Of course, unless you want a complex landing page or another professional website.

Before Gutenberg, who has now become the default editor, WordPress had a classic editor, which was similar to MS Word or another text editor. It is still available as a plugin and, as such, it has a lot of limitations but it is enough for those users who do not want complicated website design. Unfortunately, it will only be available until December 31, 2021, when WordPress will stop supporting it.

Gutenberg’s Advantages Over the Classical Editor

After the introduction of Gutenberg, user reactions were largely divided. The first reactions given by those who are used to the classic, i.e. TinyMCE editor, did not promise a bright future, to put it mildly, which is somewhat understandable because it was a big change. Over time, ratings improved as users got used to the new environment. Some of the important advantages of the new editor are the following:

Differences of Gutenberg in Relation to Page Builders

Although the name clearly says what it is – that is, block editor – Gutenberg differs from page builders by more modest content styling options. By using a block editor less, you are more limited to the options that the existing theme allows you. There is a possibility to increase Gutenberg’s reach through the available plugins but page builders are much better in this field at the moment and allow you to make more complex changes to fonts, backgrounds, animations, shadows, etc.

Furthermore, what the block editor cannot do is that e.g. inserts widgets with the desired dimensions wherever you want on the page. Although it is on its way to becoming a WYSIWYG (What You See Is What You Get) editor, it cannot yet measure up with, e.g. Elementor, because after each change you must check how it looks live on the page.

While not as complex as some page builders, we are of the opinion that Gutenberg is going in that direction and is even close to it. We believe that future versions of this editor will also have complex options such as Elementor or Beaver Builder and provide an overall visual experience. And that means you will be able to see what your site looks like to visitors right away after each change and without having to go to the ‘Preview’ option.

What still needs to be worked on are the themes because, although Gutenberg can make pages on all WordPress themes, not all themes are fully compatible with this editor to enable 100 % of its usability. Also, it is very important to adapt the existing plugins to the new editor.

After becoming the default editor, Gutenberg opened the door to others with less knowledge in this area because, with a few clicks, they can easily turn their ideas into a blog article. Although current users are accustomed to the classic editor, the fact is that Gutenberg is the future of WordPress due to easier access and additional options that will be more and more numerous over time.

Offer of the Month – Divi 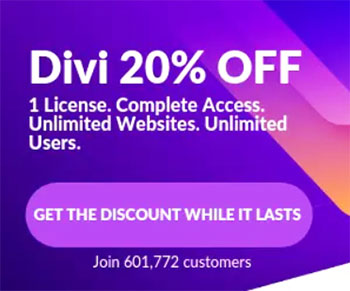